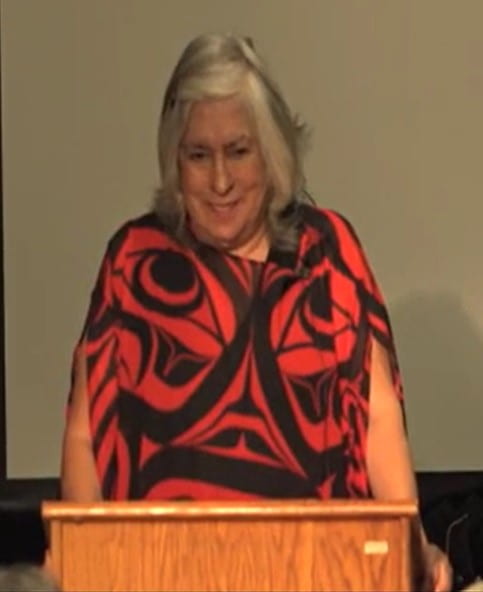 Raised in Vancouver and a member of the Stó:lō Nation, Maracle was an award-winning writer, poet, teacher, and advocate for Indigenous women, children, lands, and waters. Her works include Bobbi Lee, Indian Rebel, novels like Ravensong and Celia’s Song, short story and oratory collections like Memory Serves, and non-fiction works like My Conversations with Canadians. Of particular note are the contributions Maracle made to the essential conversations about the intersections of colonialism, gender, and sexuality. Ever the complex figure herself, Maracle’s I Am Woman: A Native Perspective on Sociology and Feminism is a tidal mark on the history of Native and Indigenous Studies, urging readers to understand the material impacts of colonialism on Indigenous peoples and, especially, Indigenous women.

In the early 2000s, Lee enlivened Canada House and Western Washington University’s campus with her stories, wit, and critical analysis as the Distinguished Professor of Canadian Culture. Lee’s time at WWU is chronicled in Bridging the Longest Border, written by Donald Alper, professor emeritus and former Director of Canadian-American Studies. “She made a huge impact on students,” Dr. Alper states. “Through her own stories and those of numerous guest speakers and performers she brought to campus, Lee presented the richness of Indigenous cultures in Canada. Her time at Western was crucial to the growth of indigenous studies across the curriculum.”

As a tribute from the University of Toronto notes, Maracle was “outspoken and unsparing in her criticism of Canada’s historical and ongoing relationship with Indigenous peoples… [holding] Canada to account for the doing the hard work of dismantling colonialism, not simply speaking the language of reconciliation.” In 2018, Lee returned to WWU to deliver a lecture in the World Issues Forum Indigenous People in the Global Context, which can be viewed at vimeo.com/265628700.

In addition to her distinguished professorship at WWU, Maracle also held teaching positions and elder- and writer-in-residence roles at the University of Toronto, University of Waterloo, Southern Oregon University, University of Guelph, and Kwantlen Polytechnic University. She was a fierce critic, public intellectual, and activist, and her words and work have touched many, many lives. She received numerous awards for her writing and teaching. In 2017, the Government of Canada recognized Maracle’s impact and influence by awarding her its highest honor, the Order of Canada.

WWU English professor Dr. Theresa Warburton states, “It’s hard to put into words the impact that Lee Maracle has had on not only the world of Indigenous literatures, but the world of literature and cultural critique in general… She wrote adamantly and with a passion that speaks to the import she saw in her work; a passion that is traceable from her first text to her last. We are blessed with the body of work she has left us as she begins her journey elsewhere and I hope that we can honor that work, especially in the contradiction she noted herself of being heralded by the very colonial state(s) against which she spoke. Living in this contradiction was part of her own reflections on the state of Canadian culture and is something we must continue to reckon with, even as we say goodbye.”

Maracle passed away on November 11, 2021 in Surrey, British Columbia. Our hearts are with her children, grandchildren, and the many loved ones who called her “auntie” and “friend.” Our students and campus community will continue to learn from Maracle’s words and lessons for generations to come, and we must strive to answer her calls for truth, justice, and decolonization.

Read other tributes to Lee Maracle from the New York Times, Canadian Broadcasting Corporation, The Canadian Encyclopedia, and the Union of BC Indian Chiefs. Check out Lee Maracle’s written works from Western Libraries and Heritage Resources: