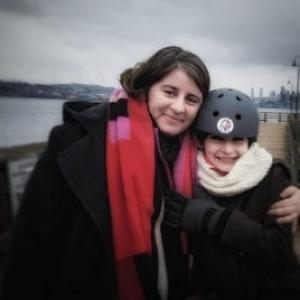 Kyla grew up in Alberta, Canada but spent many years in Vancouver, B.C., and relocated to the USA in 2004, after marrying her American husband at a “transboundary” wedding that included a model of the Peace Arch border crossing. Kyla earned her BA at Portland State and her Masters of Library and Information Science from the University of North Carolina in Chapel Hill. However, she and her family were eager to return to the PNW, so she accepted a position as a school librarian at a French Immersion school in Seattle where she spent eight years. Sharing resources and new perspectives was her favorite part of school librarianship and are an integral part of her new position. Elle est heureuse de commencer à travailler avec vous tous. Allons-y!